The last time England were booed after a World Cup group game was in 2010 and we had just witnessed a performance so poor that a bird climbed into the roof of the opposition net during the first half, convinced it had just found the most safe place in Cape Town.

On that occasion, a team including John Terry, Ashley Cole, Steven Gerrard, Frank Lampard and Wayne Rooney had a miserable night, thankful for a 0-0 draw with Algeria, and England manager Fabio Capello let it be feared: “ the fear that stops the legs, that stops the mind, that stops everything.”

Rooney, who had gone into this tournament with so much hope, looked out of shape, out of shape and out of sorts, his frustration boiling over at the final whistle when he heard the England fans booing his team.

“I’m glad to see your fans making fun of you,” she cried, languidly, into a television camera. “You ‘loyal supporters'”.

Also Read :  This World Cup’s off-field entertainment has been… strange

In 2010 England were in the midst of a World Cup collapse. Terry, who had been stripped of the captaincy four months earlier, announced at a press conference two days later that he and his team-mates were to express their frustration with Capello in a meeting that evening.

“If any player upsets him or bothers him, so what? I really think, “Sod it,” Terry said, to the surprise of many in his audience.

Capello quelled this apparent rebellion and England beat Slovenia 1-0 in the final group game to progress to the knockout stages. But by finishing second to the United States, they put themselves on course to face Germany in the round of 16. And there they were humiliated, crushed 4-1, and Terry, Gerrard, Rooney and their team-mates went home as something loomed. national pariahs. 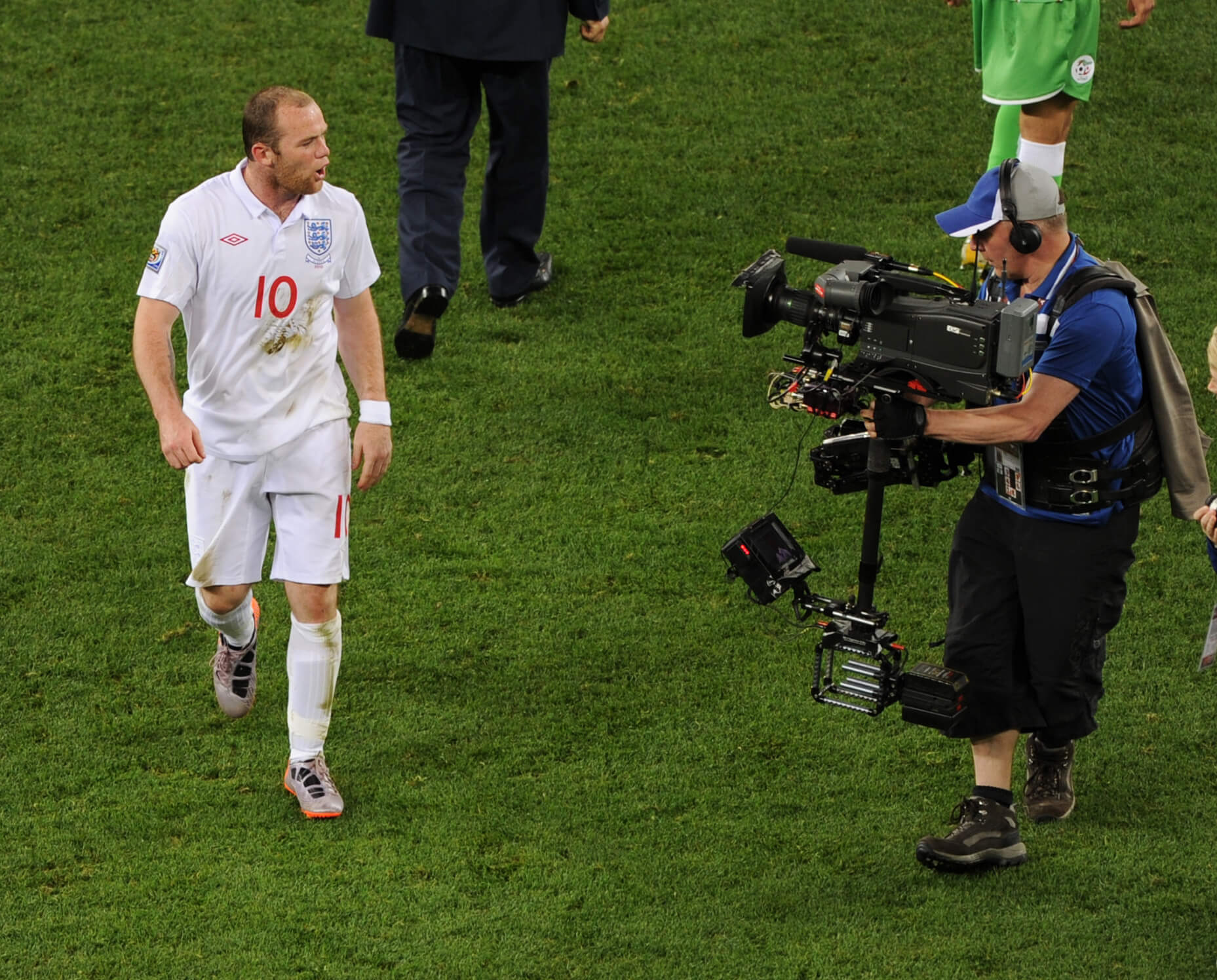 Qatar 2022 is not like South Africa 2010. There was a lull in England’s play as they drew 0-0 with the USA on Friday night, but it was not the ‘fear’ that defined them in the late 2000s and much of in the 2010s. There is no prospect of a frustrated player threatening to mutiny against the manager, or indeed of a player responding to the howls of derision from the fans by mocking their supposed loyalty to the cause.

Instead, what we got Friday night were calm, level-headed thoughts from those players who stopped to speak to reporters in the mixed zone.

“It was probably a fair result if I’m honest,” vice-captain Jordan Henderson said The Athlete afterward. “It was a difficult game. The USA did well and made it difficult for us, as we knew they would. A bit disappointed that we haven’t scored but again positive that we kept a clean sheet so it’s not all doom and gloom. It’s a point and it’s still in a good position and it’s in our hands for the next game.”

The disapproval? “Obviously you have high expectations of this team and so do we,” said the Liverpool midfielder. “We’ve come in after the game and of course we’re disappointed because we want to win every time we play, but that’s not how football works sometimes. You have to give credit to the opposition and we always know it’s going to be difficult at a World Cup.”

When asked about the boos, Henderson pointed out that the same thing happened at Wembley en route to the European Championship final last year. “I think it was the second game we drew 0-0 against Scotland,” he said. “So we still have a lot to play for, we’re still in a good position and we just have to go out and get a point in the next game.”

Like his manager’s response, it was perfectly measured. Perhaps too measured and too calm for some tastes.

It was one of those England tournament performances that piss people off: the big build-up, the big expectations, the big emotional investment (and for those fans here in Qatar a huge financial investment) and then the big disappointment.

Michael Cox and John Muller analyze England’s performance in depth here: slow tempo? too much risk to own; The struggles of Kieran Trippier, Luke Shaw, Jude Bellingham and Mason Mount made an impact in front of a dynamic, well-organised, talented USA team that was intent on pushing them away. the conservative nature of Southgate’s changes, waiting 65 minutes before making two similar changes and keeping Phil Foden and Trent Alexander-Arnold on the bench throughout.

Criticisms are legitimate, but so is the context offered for mitigation. “Of course the fans want to see goals and win games,” Trippier said. “Of course we understand the disappointment because we didn’t win the game, but we gave everything. One point is a good result. Unfortunately we didn’t win, but it’s a good point. We kept a clean sheet, it’s a good point for us in the group and now we’re moving on. Focus on the next game.”

All real. The performance was disappointing but a draw, following a 6-2 win over Iran, left them all but assured of a place in the knockout stages. Even if Wales beat them by three goals on Tuesday, England would go through. Most teams in this tournament would happily accept this scenario in their final group game. Argentina and Germany, beaten by Saudi Arabia and Japan respectively, certainly would.

It’s certainly not a 2010 scenario — let alone a repeat four years later, when England crashed out after two games, beaten by Italy and Uruguay. This was a much tougher team in 2014 and the talent pool at Roy Hodgson’s disposal was much less attractive than it is for Southgate now, but expectations were also significantly lower. After a terrible 0-0 draw in their last game in Brazil, a flawless performance against Costa Rica, England’s players were given a standing ovation by those fans who had traveled so far and spent so much and had so little to cheer.

Two years later in Nice they were eliminated from the European Championship by Iceland. Now this He made attracted an angry, almost incredulous reaction from fans. How could he not? This was a disastrous performance without structure, purpose and conviction, without coherence or skill. If there was ever a time when England fans had the right to jeer and mock their team, it was the mid-2010s.

Between 2010 and 2016 England played 15 tournament games and won just four (against Slovenia, Sweden, Ukraine and Wales) and never by more than one goal. The surprise run to the semi-finals of the 2018 World Cup came with reservations about the quality of the opposition, but they have overcome Tunisia, Panama, Colombia (on penalties) and Sweden in this tournament and have beaten Croatia, the Czech Republic, Germany, Ukraine and Denmark at the Euros before losing to Italy on penalties in the final.

In this context, it seems as if England fans have developed an extremely low tolerance for underperformance, booing them after mediocre performances but decent results that have left the team in a strong position. Perhaps Friday night was a legacy of a hugely disappointing Nations League (six games, three draws, three defeats, including a 4-0 home drubbing by Hungary), but given that the same reaction followed Scotland’s Euro draw , maybe it’s just a case of fan sentiment being entitled to demand better.

Totally natural, of course. it can be hard to look at the young talent in this team – both those on the pitch and those left on the bench, like Foden and Alexander-Arnold – and accept such an underwhelming performance.

This frustration is partly due to the approach. Southgate’s style is quite guarded — not all-out defense by any means, but mostly security. They played with freedom when they beat Iran 6-2 on Monday, but Friday night was too much of a handbrake. And when you play with the handbrake on and fail to win, it causes panic, especially when you have so many attacking players at your disposal.

But these games happen in tournaments. Take a look at England’s World Cup history and a 6-2 win over Iran looks far stranger than a 0-0 draw with the USA

It is encouraging that Southgate and his players responded more calmly on Friday – both in the way the game unfolded and in the frustration shown by the fans at the final whistle – than England’s players did in Cape Town 12 years ago. There are many things that were missing from their performance, but at no point did they seem frozen with fear or overcome with frustration like Rooney did against Algeria.

There was something Southgate said afterwards: “People will react as they will. I can’t let it affect how I feel. This is the outdoor noise tournament, and we’ll definitely have another level of that, but we’re still on track.”

“The tournament of outside noise” is a great line. There have been many previous tournaments in the past when England have appeared overwhelmed by this noise – particularly the noise from the media – but under Southgate they have been very good at blocking it out and overcoming it.

Once the noise starts, the only way to stop it from amplifying is to win. This is Southgate’s third tournament and, having created a more upbeat soundtrack in the previous two, he and his team need to keep those good vibes going. If not, they’ll just have to face the music.